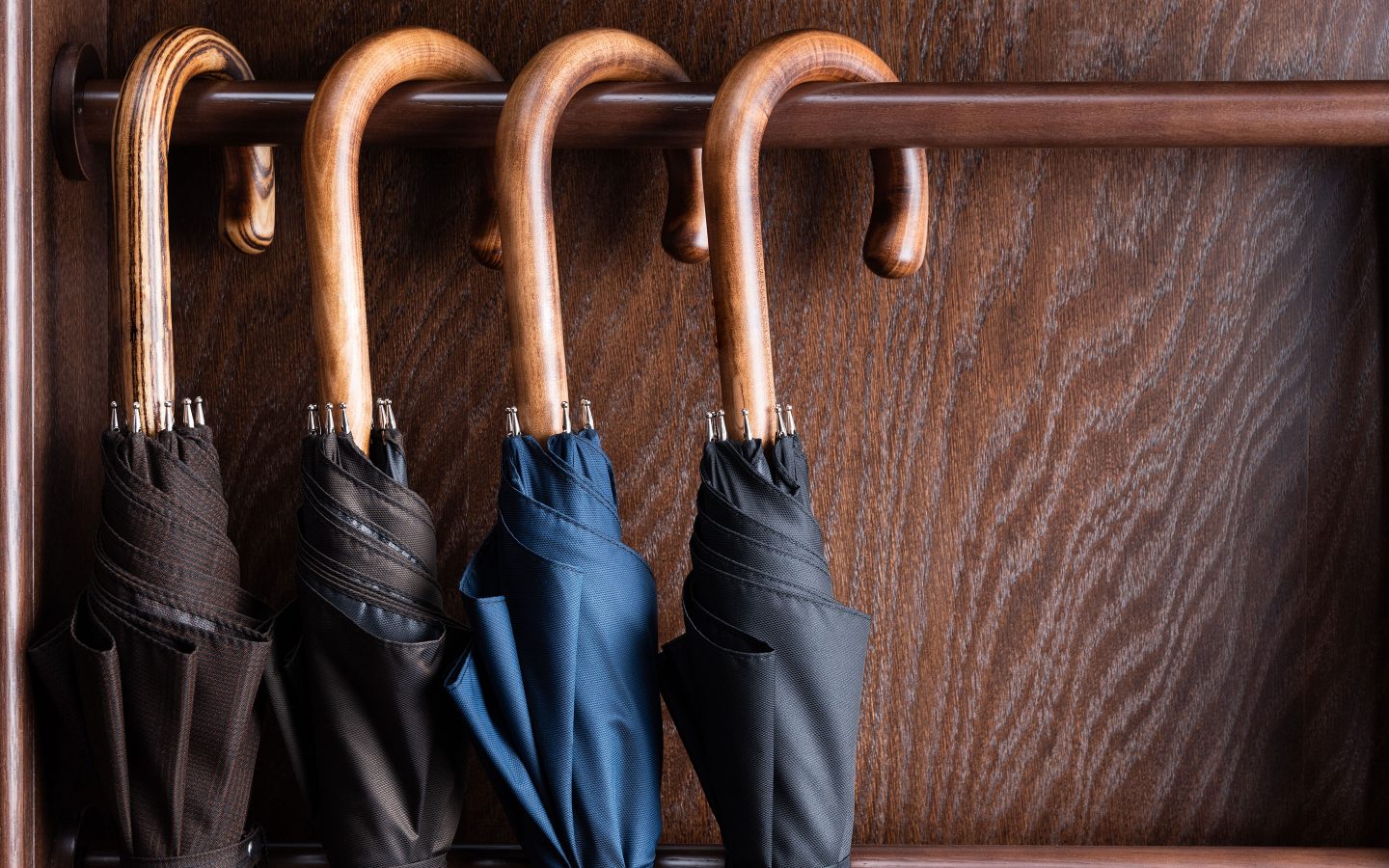 Mankind has been using versions of the umbrella and/or parasol for at least 4,000 years. Throughout the ancient civilizations of the world, umbrellas were emblems of power, both divine and secular. A coin from Herod’s time shows a version of an umbrella; one of the eight sacred symbols of Buddhism, representing a mountain holding up the sky above the head of the Buddha, resembles a parasol; Aztec rulers were shaded by parasols made of gold and feathers; and in Tibet, different deities were distinguished by their individual parasols. In Ancient Greece, only fashionable women carried parasols, as did ladies of social standing in 17th century Europe (in both cultures, it was considered too effeminate an accessory for men). It may well have continued that way, with women keeping cool or dry under their umbrellas and parasols, while their menfolk had to rely solely on hats for protection, were it not for a popular English travel writer in the early 19th century named Jonas Handy, who dared to buck convention and risk public mockery and humiliation by carrying an umbrella…

Protecting people for over four millennia
Humans have been using umbrellas and/or parasols for at least 4,000 years. Ancient Egyptian artefacts (some dating back to 3000 BC) depict the parasol as various shapes, including a flagellum (a fan of palm-leaves or coloured feathers fixed on a long handle). An engraving of an Ethiopian princess travelling through Upper Egypt in a chariot clearly shows a kind of umbrella fastened to a sturdy pole in the centre. According to historians, the umbrella was widely used throughout Ancient Egypt, and was partly a mark of distinction, but was evidently prized more highly for its functionality than for its ornamental qualities.

In Ancient Greece, the parasol (skiadeion) was an indispensable accessory for a lady of fashion in the late 5th century BC – it is mentioned by Aristophanes as being a common article used by females (but not males because that was a seen as a mark of effeminacy) and was not only portable, but able to be easily opened and closed. For a brief period, between 505 and 470 BC, cultural changes led to Greek men beginning to use parasols too. Greek vase iconography shows a transition from men carrying swords to spears to staffs to parasols to, eventually, nothing. The umbrella was often a symbol of status – for example, the daughters of the Metics (foreign residents) were required to carry parasols over the heads of Athenian women as a public display of their inferiority. And it often had religious significance, such as when a white parasol was borne by the priestesses of the goddess during the feast of Athene Sciras.

From Ancient Greece, parasol usage passed to Ancient Rome, where it was also routinely used by women, while “effeminate Roman men were permitted to shield themselves from the heat using an umbraculum”, a device made from skin or leather, and capable of being lowered at will.

References to parasols can also be found in relics from Ancient India, such as the Sanskrit epic Mahabharata (from the 4th Century BC) which relates a legend in which an angry hunter shoots his arrow at the sun for delaying his wife, causing the sun to beg for mercy and to offer the woman a parasol as penance. In the Congo, umbrellas were used during marriage ceremonies to mark sacred space, and folk tales from Africa to Burma featured kings who reigned with their royal umbrellas.

The Chinese character for umbrella is sǎn, a pictograph resembling the modern umbrella in design: 傘

In an ancient book of Chinese ceremonies, called Zhou Li (The Rites of Zhou), dating back to 2,400 years ago, there is a direction that “the dais should be placed upon the imperial cars”. The figure of this “dias”, and the description of it given in the explanatory commentary, indicate it was some kind of giant umbrella, composed of “28 arcs” and held together with “ribs”, with a supporting rod in two parts, the lower being a wider tube into which the upper rod can slide in and out.

The oldest written reference to a collapsible umbrella is Chinese and dates to the year 21 AD, when Wang Mang, emperor of the Xin dynasty, had one designed for a ceremonial four-wheeled carriage. A commentary from the Second Century described how this collapsible umbrella on Wang Mang’s carriage had bendable joints which enabled it to be extended or retracted. A First Century collapsible umbrella has since been recovered from the tomb of Wang Guang in the Korean Peninsula, illustrated in a work by Harada and Komai.

However, the Chinese collapsible umbrella is a concept that likely dates back to many centuries earlier. Zhou Dynasty (circa 1046 BC – 256 BC) bronze castings of complex socketed hinges with locking slides and bolts – which could have been used for either parasols or umbrellas or both – were discovered in a Chinese archeological site, and dated to the 6th century BC.

During the Middle Ages, umbrellas were carried over the heads of popes, a custom still used in modern papal processions. By the seventeenth century, parasols were a popular accessory for society ladies who wished to stay shaded from the sun, and would use a waterproof version in the winter months to protect themselves from the rain. However, parasols and umbrellas were still considered too effeminate for men to use. Then, in the early nineteenth century, a popular travel writer in England named Jonas Handy, began carrying an umbrella. The act was considered so taboo that he was widely mocked for being “feminine”, but he ignored his critics and continued, and gradually, other men followed suit. Soon, men throughout the British Isles were carrying umbrellas, both as an essential element of dress and for reasons of status, as well as, of course, practicality.

In 1830, James Smith and Sons opened London’s first umbrella shop. Located at 53 New Oxford Street, the shop has remained in the same location every since and is still trading today. Early European umbrellas had been constructed using whale bone and wood with an oiled canvas covering. In 1853, Samual Fox invented the first steel-ribbed model, which was the forerunner of the modern compact umbrella.

The word parasol derives from French, and is a combination of para meaning “to stop” or “to shield” and sol meaning “sun”. The French word for umbrella is parapluie, which similarly combines para with pluie meaning “rain”, which in turn derives from the Latin word pluvia.

The English word umbrella evolved from the Latin words umbra, meaning shaded or shadow, and umbella (an umbel is a flat-topped rounded flower). 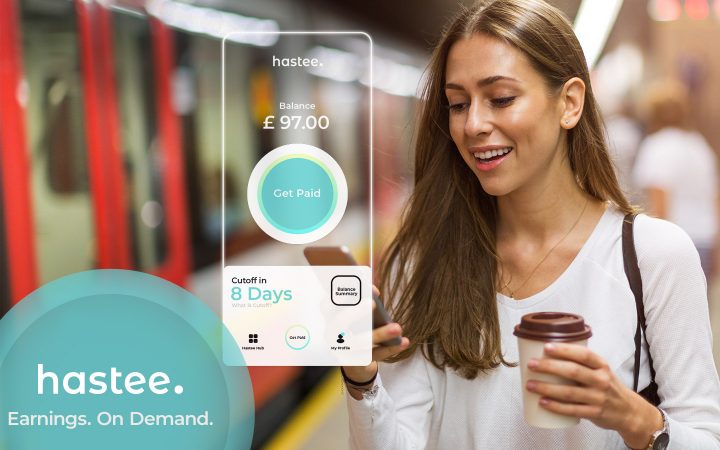 Hastee secures £208 million of investment to revolutionise the way people are paid, for the better.